Inari O-kami, also known as O-Inari Sama, is the Japanese Kami/kamui (God/spirit) of industriousness, grains, the harvest, agriculture and is generally viewed as a fertility Kami. O-Inari is a genderless Kami in that Inari has been sometimes seen depicted as a beautiful woman and at other times as a powerful man.

O-Inari Sama is not the Kami of foxes and Kitsune as often stated however Inari does have foxes as attendants and messengers. You will see them guarding shrines with their bright red bibs (symbolizing the blood of life) and they will always be in pairs, one holding a key and one holding a globe of fox-fire.

The symbolism here is very specific to the origins of Inari worship and Edo period life in the still rural areas of Japan. The key the foxes hold is to the rice granary, the most necessary food to survive a harsh mountain winter while the globe represents the warm fire against a cold winter and also to represents the soul. 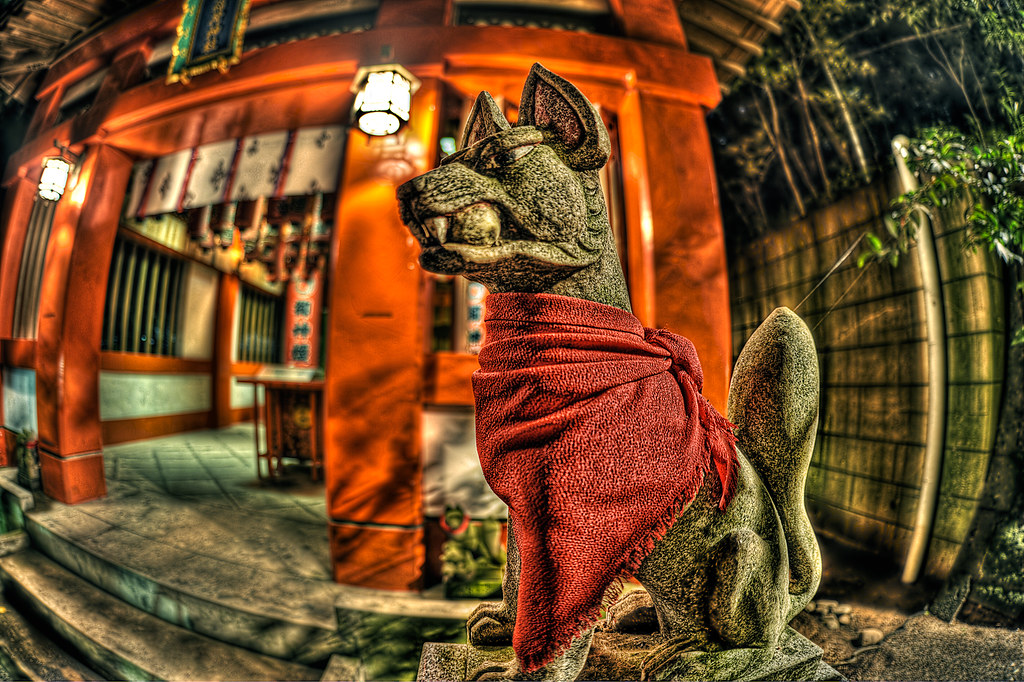 This being said, many Japanese do see O-Inari Sama as a fox and depending on which temple you visit Inari is a fox or kitsune while others will swear it off as a strange folk belief that they are actively trying to dissuade people from believing. When I asked a Kannushi (Shinto priest) about this, however, he told me that,

As for Inari Okami, people believe what they want to believe. I think Inari likes that.

As the popularity of Inari grew outwards from around the mountains and fields interesting things began to happen. Folks began seeing foxes and fox-fire (seen as blue glowing orbs) and began leaving out rice as an offering to appease them and ask for a good harvest or good business. These Inari foxes were said to be especially fond of sweet rice rolled in tofu wrappings, a very unique type of Japanese dessert forevermore dubbed O-Inarizushi (Sushi of O-Inari) and it is made often for celebrations by shrines dedicated to O-Inari Sama.

The color red is also viewed as sacred to Inari because it is the color of blood/life and also reminds people of the rich red color of a fox’s coat in the summer when they are most active and seen at all hours of the day. Because red is sacred to O-Inari Sama shrines in Japan that are dedicated to Inari will be decorated with red lanterns and brilliantly painted red tori (wood arches). Devotees will often pay to have a torii put up in their name and over time, some of the larger and more popular shrines, have entire pathways shaded by hundreds of tori.

Many of the larger shrines also maintain cemeteries for their worshipers. When walking through an Inari cemetery you will find graves with elaborate headstones carved to look like shrines complete with red tori and their red-bibbed guardian foxes. Many families, especially Shinto families, practice ancestor worship and the headstones are made to look like shrines for this very reason. The belief is that the family member can be reached through this mini-shrine. Families will leave offerings on the anniversary of their death, they will clean the mini-shrine, change the foxes’ bibs if they are soiled, and repaint them if necessary. It becomes a ritual in itself to clean a shrine. Many families will also maintain an in-home ancestral shrine to keep the connection all year round.

Shinto and worship of O-Inari Sama is widely practiced outside of Japan even if most don’t realize it, Shinto has opened itself to non-Japanese believing that the encompassing spirit of Kami is everywhere and that all lands have Kami. In the USA we now have the Tsubaki Grand Shrine in Washington which recently installed an Inari shrine. I’ve been to it and it is gorgeous, if you’re in their area you should visit. Also, Hawaii has many shrines as does San Francisco and San Diego, California.

Thank you for reading!

The Fox and the Jewel – Karen A. Smyers